Statement of Nikos Maziotis at the ongoing trial of Revolutionary Struggle 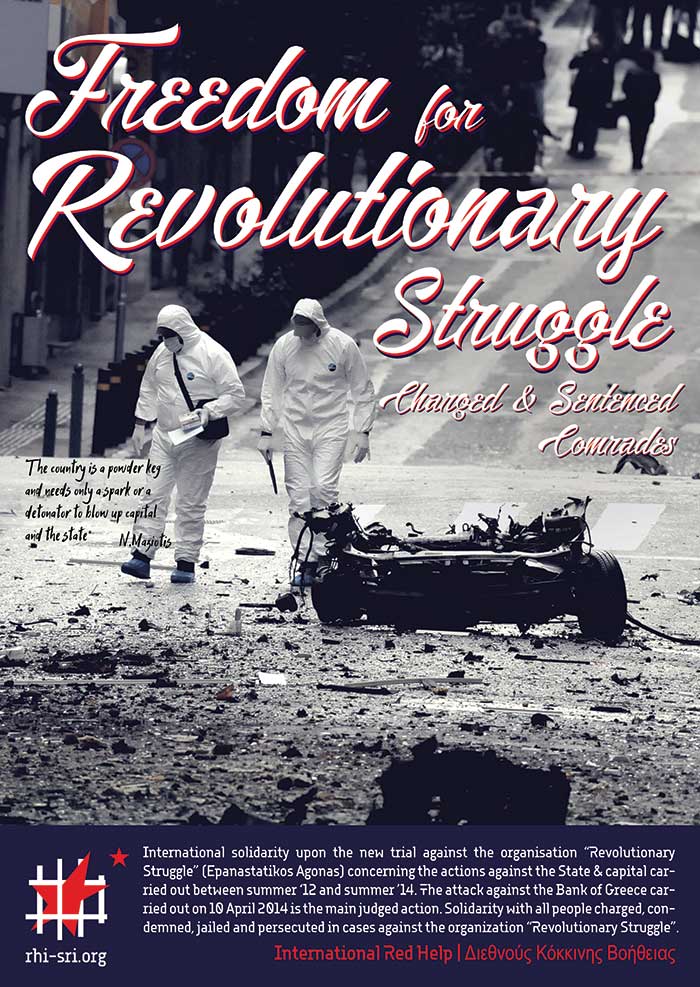 The armed attack of Revolutionary Struggle against riot police in Exarchia was one of the most important actions of the organization. It was a legitimate political and social action in retaliation for the murder of 16 year-old Alexandros Grigoropoulos by the policemen Korkoneas and Saralioti, which took place on December 6, 2008. This murder was the result of the intensification of police violence in recent years, and was formed under conditions of intensive neoliberal reforms and the “war against terrorism” in the same period.

In particular, this development took on larger dimensions in the spring of 2007, when there were violent clashes and attacks in the center of Athens between students, youths and anarchists against squads of riot police, in the protests that were against the bill of the Ministry of Education to promote the privatization of education.

The then minister of Public Order, Byron Polidoras, when taking office truthfully addressed the police as “Praetorians”, and when after these riots followed anarchist attacks on police stations in Exarchia and Papagos, he had stated that “the police have steady nerves” and can safely pull out their guns. Essentially, this more or less gave the green light to fire against unarmed demonstrators, youths and anarchists. At the same time there was a climate promoted by the state and the Ministry of Public Order, with declarations from this same minister and also the police union, promoting the cleaning of anarchists from Exarchia, speaking of the reclamation of Exarchia for the state. A similar debate and counter-debate exists now between Syriza government and the main opposition party of New Democracy.

Revolutionary Struggle had warned in April 2007, when we bombed the 2nd police station of Nea Ionia in Perissos, that the intensification of police violence would result in deaths from police fire- and that in this case we would answer in the same way. Indeed, this intensification of police violence came to pass a year and a half later, as a patrol car wound up in a skirmish with some youths on Messologi street in Exarchia, and ended with the murder of young Grigoropoulos by “brave” Korkoneas and Saralioti.

Revolutionary Struggle (consistent with the warning given when we attacked the aforementioned police station) proceeded with attacks against riot police, initially in Kokkinopoulou in Zografou, as a dress rehearsal, and then in Exarchia on January 5, 2009, at the intersection of Kountouriotis and Zaimi streets, where there were standing guard three riot police. This operation, apart from the tangible results, with one seriously injured riot policeman, whose life was spared by luck, with his two immediate colleagues looking only to save their own lives, and the other cops unwilling either to help them or to pursue the members of RS, has a broader political significance.

The political significance of this action was not limited only to a retaliatory action for such a murder, but was much greater. Revolutionary Struggle, in interpreting the signs of the times (such as the outbreak of the global financial crisis that began in the US in 2007 with the bursting of the bubble of subprime loans, and which globalized with the collapse of Leaman Brothers in September 2008) and given the precarious state of the Greek economy due to its high debt, predicted a period of turbulence, a period of structural destabilization, as the country was entering into the vortex of the crisis from 2009 onwards, and since the government would be forced to take measures that would cause the social delegitimization of the system. Effectively, Revolutionary Struggle predicted in 2009 the epoch of memoranda and austerity policies, with the IMF directives that would be imposed on the country.

In these times, when the system is in crisis- economic crisis, crisis of the political system of representative democracy, a crisis of confidence and legitimacy in the eyes of the majority of society- this period opens up, in our view, an opportunity to attempt a break with the financial and political system, to make a revolutionary attempt by making a strong revolutionary organized political force, a revolutionary movement which would use armed struggle to overthrow capital and the state.

The uprising of December 2008, the greatest youth uprising in modern Greek history (and indeed perhaps in Europe in recent years), was a response to the Grigoropoulos murder, and embarrassed the regime to the point of it considering the possibility of declaring martial law. This showed the explosive conditions of rage underlying Greek society at the time when the regime was initially faced with the crisis, which a revolutionary movement could exploit to overthrow the regime.

Before the killing of Grigoropoulos by the policemen Korkoneas and Saralioti, Revolutionary Struggle had designed strategic actions in order to hit structures, mechanisms or persons of the economic and political system that were responsible for the crisis and its management. In the autumn of 2008 we had already decided to hit the Athens stock exchange with a large payload of explosives, but after the murder of Grigoropoulos the organization decided to postpone this campaign of actions and attack the forces of repression.

Revolutionary Struggle, in the notice which claimed responsibility for armed attacks against riot police, clearly stated that an attempt to overthrow the regime in crisis necessarily includes armed struggle, which is needed in order to eliminate the regime’s security forces.

The attack of the organisation on the three riot police on January 5, 2009, which resulted in serious injury to one of them, and the reaction of inertia from the other two and from the rest of the squad stationed a few paces further down on Bouboulinas Street, showed that a few fighters, formally untrained, with their will and determination can neutralize and render these praetorians of the regime, the police, unable to react. This would be a useful political lesson, if there were to be formed a revolutionary movement in the immediate future, which would use armed action to undermine and overthrow the regime in general.

Imagine for example, what would have happened if at least part of the thousands of people who repeatedly tried to storm the parliament in the period of the memorandum votes, like in May 2010 or in February 2012, had possessed weapons.

In this case, no police force, no force of riot police or EKAM, would have been capable of stopping an armed people determined to seize the parliament- this lair of the political executioners of the people, of those who are the instruments and servants of foreign and local usurers, the banks, multinationals, the mechanisms of international capitalism, all of those responsible for implementing austerity programs that have led to widespread poverty, misery and thousands of deaths.

Revolutionary Struggle advocated with this attack for an armed Athenian Commune in following the example of the Paris Commune of 1871, the first armed proletarian revolution. This is actually the great political significance of this attack. That only by a revolution will society, the people, the workers be freed from the shackles of capital and the state, and that the use of armed struggle is essential and necessary to defeat the security forces that protect the state and the capitalists. The attack on January 5, 2009 was a small confirmation of this position and, as Revolutionary Struggle, we bequeath this political legacy to society.