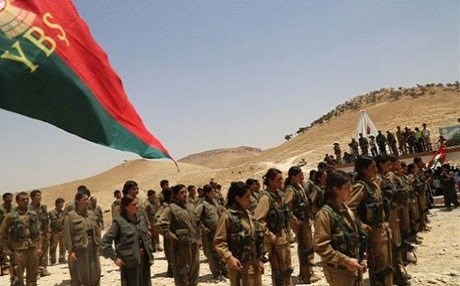 KCK (Kurdistan Communities Union) Executive Council Co-Presidency released a statement regarding the attacks of KDP-affiliated forces against the Êzidî people in Shengal.

KCK called for the recognition of the Shengal people’s will for self-administration and self-defense, and urged an immediate end to the attacks which -it said- aim to break the will of Shengal.

“ATTACKS MUST BE STOPPED IMMEDIATELY”

Remarking that the attacks on Khanesor and Suninê areas aimed to break and seize the will of Êzidî people in Shengal, KCK underlined that: “After the genocide of 3 August, 2014, Êzidî people demand to realize a self-administration and self-defense. While this demand needs to be respected, it is neither moral, nor conscientious or democratic to seek to govern Shengal like the pre-3 August period and to establish authority over them.

The attack of the forces affiliated to the KDP is an occupant force onslaught that does not recognize the distinctness and autonomy of diversities in Kurdish nationality. We call for an immediate end to this attack, and recognition of the Shengal people’s will for self-administration and self-defense; a reality that constitutes a must for the building of a political and social system.

No political force has the right to build an authoritarian system an Shengal. A political solution in Shengal can only be achieved only through the recognition of the Êzidîs’ political will and self-defense. Êzidîs’ approval of a political system, structure and status other than this will mean an approval of the political system in which they have been through 73 genocides so far.”

“ÊZIDÎS ARE A HERITAGE FOR THE KURDS AND HUMANITY”

KCK underlined that Êzidîs are a historical heritage for the Kurds and humanity who therefore bear responsibilities for them, noting that all international social and political powers, the UN in the first place, also have responsibilities in order for Êzidîs to attain a democratic self-administration.

“This attack came after the Turkish state repeatedly pointed Shengal as a target, and soon after Mr. Masoud Barzani’s visit to Turkey. The Turkish state’s official news agency ‘Anadolu Ajansı’ reporting that this aggression was carried out at the request of the Turkish government does reveal clearly which political relations are behind this attack.”

WARNING TO THE KDP

The statement by KCK continued; “KDP must know that the AKP-MHP government has spread the Turkish state’s policy of genocide to the entire Kurdistan territory today. The Turkish government’s relationship with KDP aims for the elimination of the Kurdish Freedom Movement that constitutes an obstacle to this intended genocide. For this reason, KDP must avoid supporting the Turkish state’s policies on Shengal, Rojava and Bakurê (Northern) Kurdistan. KDP must leave the Êzidîs -the most oppressed society of the Kurds- in peace, and respect their will.”

Pointing to the the major political and economic problems in Bashurê (Southern) Kurdistan, KCK stressed that KDP must basically focus on the resolution of these problems.

“Such an aggression on Shengal is unacceptable in such a process when we call for national unity and national congress that will contribute to the resolution of all these problems. It is not possible to survive the political and economic problems in Bashurê Kurdistan by creating other agendas. An attack on Shengal will not only result in shedding the blood of Kurdish youths and worsening the relations among Kurds, it will also gladden and encourage the enemies of the Kurds. From this standpoint, KDP shouldn’t be a part of the Turkish state’s plan to use Kurds against each other and to keep them again in a genocidal system in the 21st century.”

“KURDISH FREEDOM MOVEMENT WILL TAKE NO STEP BACKWARDS THROUGH IMPOSITIONS”

The statement by KCK Executive Council Co-Presidency continued as follows:

“While the Kurdish Freedom Movement seeks a settlement of the problems among Kurdish political parties through dialogue and has a talk with the KDP to this end, such an attack on Shengal will produce no results other than a deterioration of the existing problems by harming the political relations and extending the lack of confidence.

We should emphasise once again that it is not possible to make the Kurdish Freedom Movement accept some things or take a step backwards by means of impositions. If similar attacks are resumed, it is clear that KDP will not make any gains from this attempt. We therefore reiterate our call to the KDP to stop such attacks, and to come up with a solution to the problems concerning Shengal through the assembly and self-administration organs of the Êzidîs.

We call on the Êzidî people to defend the lands of Shengal that brought them into existence, to establish their self-administration systems on the basis of ensuring self-defense in order not face another edict and to realize a democratic autonomous life. We also call on all the Êzidîs living outside of Êzidî land to unite around this resistance and to take part in the struggle to attain a free and democratic living.”

KCK remarked that the Kurdish people and Kurdish public opinion is the main factor for the resolution of the problems between Kurdish political powers and obstruction of conflicts, adding:

“When the Kurdish people rise up and intervene such situations, and when the Kurdish public opinion manifests their stance against an internal conflict, no political side will dare to conduct such attacks. On this basis, the Kurdish people in four parts of Kurdistan and abroad should oppose this attack and put democratic pressure on KDP in order for it to withdraw its military forces from Shengal and to stop the reinforcement of military forces. First and foremost, the people of Bashurê Kurdistan and all political powers, democratic society organisations and institutions, press organs, intellectuals, artists, writers and academics should oppose the KDP’s attack on Shengal, take to the streets and ensure the withdrawal of KDP’s these military forces. They should oppose the policy pursued by the KDP on behalf of Bashurê Kurdistan that intends to pressure, threaten and blackmail the Shengal people with an aim to break their will.

We call on all humanity, democratic political powers, institutions and international powers to defend the Êzidîs- a heritage of history to humanity-, to stand against the attacks targeting Êzidîs, and to support Êzidî people’s struggle and resistance to attain self-administration, self-defense and autonomy.”