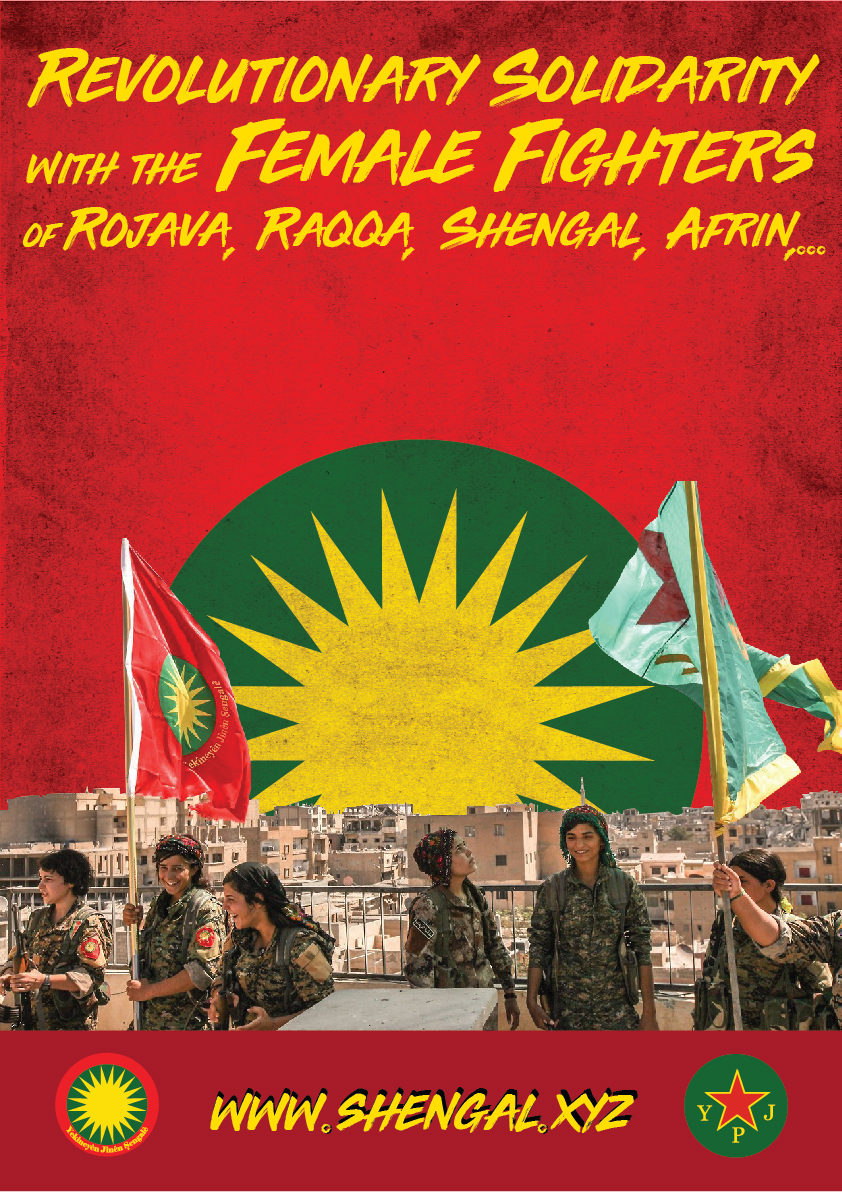 Female fighting units have taken up arms and are now writing their own history, liberating the regions of Rojava and Shengal from the caliphate of DAESH.

The liberation of Raqqa was a victory of women.

The Kurdish-led units (YPG/YPJ) in the Syrian Democratic Forces (SDF) played an important role in the victory over the so-called caliphate of Daesh, with the final offensive on Raqqa ending October 17 2017. The Shengali women units together with the YPJ (Women’s Protection Units) were at the forefront of this battle, which marked the end of the caliphate.

With the official launch of the YPJ in April 2013 in Rojava, the history of women has reached a new phase. In this historic step the women of Rojava have taken their future into their own hands. By taking up weapons, they have begun to fight for their own liberation, to become a part of the revolution and to defend it. In doing so they are imposing a new vision of women onto society. In August 2014, with the help of the YPJ, the Ezidi women followed in the footsteps of their sisters in Rojava and formed their own women’s battalions, the YJS (Shengal Women’s Units).

In August 2014, Daesh invaded the villages of the Ezidis, a people from upper Mesopotamia spread out across Syrian, Iraqi and Turkish territory, and murdered about 12,000 of them. About 5000 women, girls and children were captured and enslaved.

For the Ezidi population the liberation of Raqqa is more than a symbolic victory in the fight against DAESH. For the YJS, this victory means vengeance for the atrocities committed by DAESH against their sisters and comrades.

The war is not over. The caliphate has been defeated but isolated cells of DAESH still exist. The women’s units need to be ready for new attacks from Turkey, Iraq and other armed groups.

Celox Campaign
To celebrate 8th of March, International Women`s Day, we want to send Celox bandages to the Ezidi women units and other women military units in the Shengal mountains and in Raqqa, Minbish or Afrin…

With this campaign, led by women for women, we want to show our solidarity with our sisters and comrades in Shengal and Rojava (Afrin, Kobane and Cizre).

60% of those wounded by gunshots die from blood loss while waiting for care. Celox dressings stop the bleeding quickly and effectively and therefore save lives. One bandage costs 75€. The Celox bandages are distributed to the fighters at the frontline through competent medical units.

For the liberation of woman!
Revolutionary Solidarity with the female fighters of Rojava, Raqqa, Shengal, Afrin…