A trial against the RHI? An attack on Rojava! 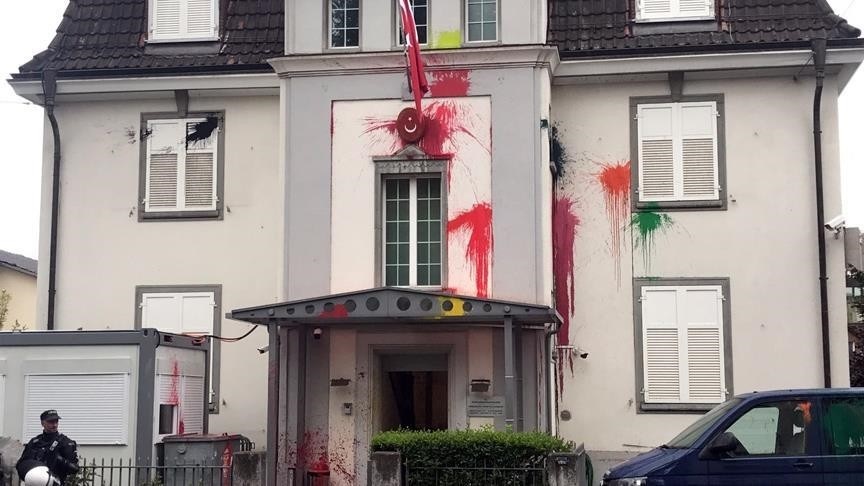 On 18 November 2021, our comrade Andi, secretary of the Red Help International, is due to appear before the federal criminal court in Bellinzona, the highest court in Switzerland. The core of this trial is the militant attack on the Turkish consulate in Zurich in 2017 in solidarity with Rojava.

This is not the first time that our secretary, or our members, or our structures have found themselves in court. But this trial has a special character and we would like the revolutionary and internationalist left to understand what is at stake.

First of all, we must bear in mind that solidarity with Rojava is not a simple duty of internationalists and anti-fascists in support of a people facing brutal oppression.
Rojava has a special place in the global frontline between revolution and counter-revolution. As an authentic experiment, testing new paths of resistance and popular self-organisation over time, Rojava must be defended tooth and nail.

In the study that the RHI published on Turkey’s strategy of low-intensity warfare to annihilate Rojava and the Kurdish liberation movement, it was noted that one element of this strategy was the attack on the political and organisational support of the movement.

In Europe we are witnessing the deployment of this specific offensive, ranging from death squads to concerted troll campaigns to influence debates on internet chat rooms. Between these two extremes, between targeted assassinations and the most insidious manifestations of soft power, there is a wide spectrum of actions, aiming at “bringing to heel” the Turkish or Turkish-descendant communities in Europe and at paralysing any support to the Kurdish cause.

The forces at work are diverse and all play a specific role: diplomatic representations, preachers in mosques, local AKP structures, secret service/mafia/fascist networks, businessmen involved in trade with Turkey, etc.

One of the particular objectives of this offensive is to obtain the total criminalisation of the Kurdish liberation movement in Europe, i.e. the repression of solidarity by the police and justice systems of European countries. The trial against our comrade is a case in point because it is only taking place due to diplomatic pressure from Turkey. This pressure is explained by the role that the comrade plays in the international solidarity with Rojava. It is remarkable that the Swiss Federal Prosecutor’s Office has tried several times to stop this procedure: either because of the weakness of the case (lack of evidence), or because they have other investigations going on. The Turkish state always opposed this and demanded, and finally obtained, this trial.

The Zurich police took the opportunity to seek a new conviction of our comrade. During Covid, the Zurich police also made a qualitative leap by systematically arresting her as a preventive measure during the mobilisations. The cantonal authorities took advantage of the “Turkish trial” to add charges such as non-compliance with Covid regulations.

But, for international solidarity, it is important to keep the focus on the fact that this trial is part of a general and multifaceted Turkish offensive against the supporters of the Kurdish liberation movement, an element of their low intensity war strategy.

From this point of view, there is no need to distinguish between the “more serious” and the “less serious”. The Bellinzona trial, like the water impoundments by Turkish dams on the Euphrates to thirsty Rojava, like the use of poison gas by Turkish commandos in Iraqi Kurdistan, like the shooting of HDP supporters in Greece earlier this month, are complementary elements of a global strategy.

The response of the European revolutionary left must also have this global, strategic character. That is why, in mid-November, in response to the appearance of our secretary before the Swiss courts, Red Help International is calling for action against Turkish fascism.